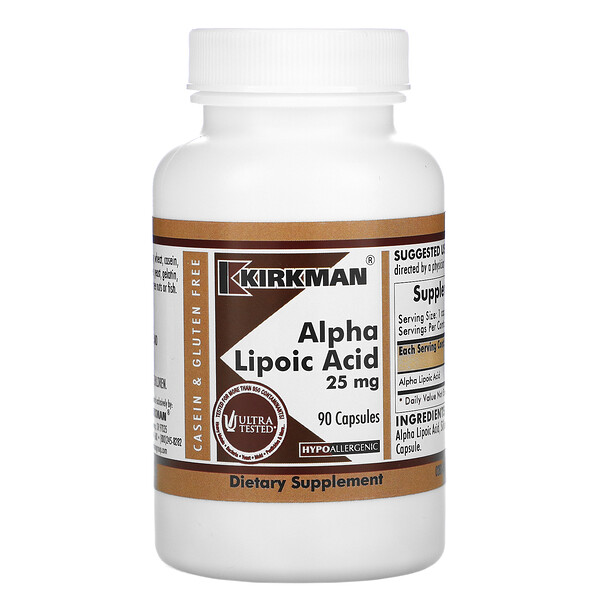 Kirkman's Alpha Lipoic Acid is a powerful and versatile antioxidant that helps protect the body against free radical damage and, as a result, is a protector of many types of cells and tissues. It also helps increase glutathione production, which helps in detoxification processes in the body.

This is a hypoallergenic formulation specially designed for individuals with special requirements and sensitivities. Each capsule contains 25 mg of alpha lipoic acid.

Alpha lipoic acid is a disulfide compound also known as thioctic acid. Lipoic Acid is a unique antioxidant in that it is both fat- and water-soluble. Other well-known antioxidants can only function within their soluble media, such as vitamin E in fatty membranes of cells and vitamin C in watery portions of cells. Because of its dual solubility, lipoic acid can function in both fatty and aqueous phases of the cell. This is significant and makes lipoic acid a complete antioxidant capable of defending against a wide variety of invading free radicals.

Alpha lipoic acid is found naturally in foods such as spinach, broccoli, tomato, liver, heart and animal muscle tissue. Its bioavailability from food may be limited, however, because it is bound to a protein called "lipoyllysine.” Preliminary research suggests that the lipoic acid found in supplements may be more biologically active than lipoic acid bound to this protein in food. Kirkman’s Alpha Lipoic Acid capsules can be swallowed or the contents of the capsules mixed in food or beverages.

One capsule per day or as directed by a physician.