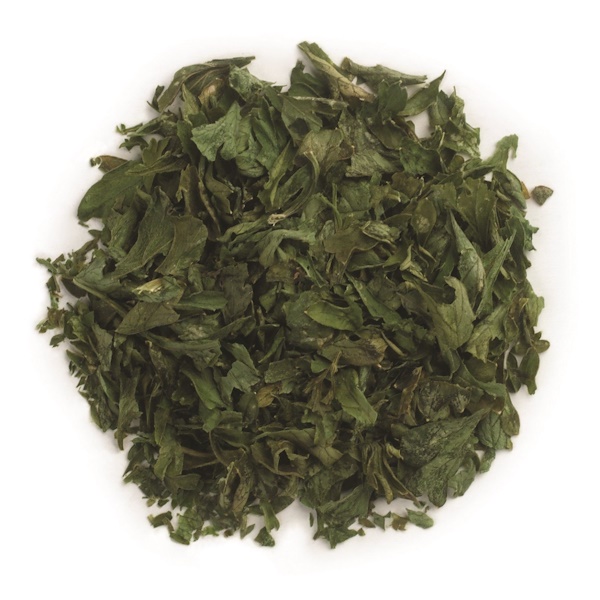 With a bright green color and a mild, fresh flavor, Parsley is a must-have for the pantry. Use it to flavor soups, vegetables, sauces, dressings, eggs and any potato dishes.

A bright biennial with thin, spindle-shaped roots and grooved angular stems, parsley grows upright and blooms in greenish/yellow flower clusters. There are many varieties of parsley, including Petroselinum crispum (curly-leaf or common parsley), P. latifolium (Italian or flat-leaf parsley), and P. tuberosum, which is grown for its tender, edible root. Italian parsley grows bigger and ganglier than the curly leafed, reaching three feet compared to one. And it's stronger tasting than the other varieties.

The genus name Petroselinum comes from the Latin for "rock" or "stone" (petro) and "celery" (selinon), likely a reference to the plant growing in rocky places. In ancient Greece, parsley was associated with death and was not eaten. In fact, someone near death was described as "in need of parsley," which was planted near graves. It was also used as a wreath for Hercules, symbolizing his strength. The Romans did eat the plant; they used parsley as a freshener to mask the smell of garlic. It was also considered a tonic and a treatment for rheumatism and kidney and bladder stones. Greeks and Romans both placed parsley on their tables to prevent intoxication from wine.

Parsley grew on walls and in rocks in 16th century England, where it was called "rock selinon." Long associated with Satan, there were rules about planting it safely-- it should be done on Good Friday, by a male head of the household. If planted by a virgin, that virginity would be lost to the devil. It was believed that when sowing parsley, the seeds traveled to hell and back many times before germinating. (Parsley is slow to germinate!) Its use as a cooking spice grew through the ages. In the 18th century, Louis Augustin Bosc d'Antic wrote, "To take parsley away from the cook, would make it almost impossible for him to exercise his art." The colonists brought parsley to the Americas, where it's been cultivated ever since.