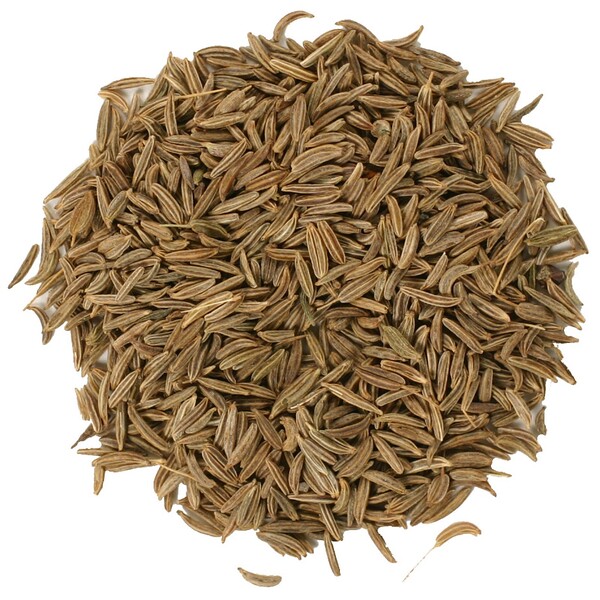 One of the modern world's most widely used seeds, caraway has probably been cultivated and consumed in Europe longer than any other spice. Enjoy its distinctive taste in breads, biscuits and cookies, or in salads and other vegetable dishes.

Caraway is a member of the parsley family, belonging to the genus Carum, and the species carvi. A hardy biennial that self-sows, the Caraway plant is sparsely leafed and hollow with branching flower stems, and dainty, white flowers. The fleshy root, which tastes somewhat like carrots, is yellowish on the outside and whitish on the inside. The tiny, curved seed--which is actually one-half piece of the fruit of the plant--is brown and hard. Archeologists know that caraway seeds date way back--they found the tiny seeds in a pile of 5,000 year-old debris left by primitive Mesolithic lake dwellers in Switzerland. More evidence of its longevity is written; it's in Dioscorides' Ebers papyrus of 1552 BC, as well as a 12th century German medical book and a 14th century English cookbook.

Medieval cooks--who used the leaves, root and seed--found caraway an easy way to add flavor and zest to plain food, and caraway seed cake was traditional feast fare of the farmers. A time-honored ingredient in love potions, caraway was reputed to have power against evil, as well. In Elizabethan times, caraway seeds were served with roasted apples. They were also popular additions to other baked fruits and cakes and were commonly sprinkled on buttered bread at tea. American colonists are among many who chewed the seeds to freshen the breath after meals. The pleasantly sharp aroma of caraway seed is reminiscent of dill, and its warm, sweet, biting flavor is a bit like a blend of dill and anise. It's found in kitchens throughout the world. (By the way, the roots and leaves can be used fresh--the long, slender roots are sometimes boiled as a vegetable and the leaves--which taste like the seeds, but are more subtle--are used sparingly in salads, cauliflower, cream soups, and cabbage and potato dishes.) Italian street vendors sell hot chestnuts that have been boiled in caraway seeds, and the Germans make a popular kummel liqueur that includes caraway, cumin, and anise. It's also used in "comfits"--sweet candies made of sugarcoated seeds, designed to be eaten after meals. The traditional cuisines of a number of other European countries--like Austria, England, and the Netherlands--have long included it in their fare.